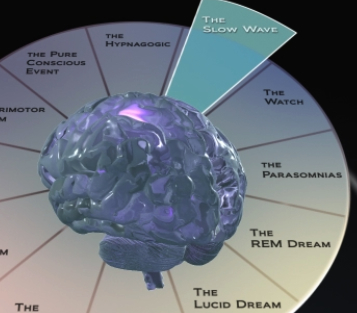 Bob Yoshioka at Shark Teeth Films made the animation. At every moment in the brain, massive numbers of neurons build up and then release little electrical charges. When these neurons fire in unison, it’s an indication that they are part of a single process or “conversation.” Although at any one time there are many different local conversations happening in the brain, there is often a dominant global conversation which – like a fingerprint – can be used to identify most of the shifts in consciousness that happen as we move around the wheel.

Both the colour legend at the bottom and the undulating brain wave line animation in the background refer to the speed at which that dominant global conversation is happening in a particular state. Originally we wanted to make the brain pulse at the real EEG frequency, but it’s impossible to get a frame rate of 40 flickers a second, which is gamma. So we prorated everything down. Purple-blue is slow, red-orange is medium, and yellow-white is fast. The faster the conversation, the more energy in the system, the higher our state of arousal. That said, this is an extremely gross characterization – there is a lot more than this going on in the brain at any one time.