On Sundays, people from around the world come together for a live meditation and hang out. Or they watch it later. It’s fun (ish). It’s community. Nothing really happens.

What is the Do Nothing Project all about?

This is not about any of that.

Welcome to The Do Nothing Project. An experiment in … not much. Together.

How does it work? Every Sunday at 8pm EST, go to my YouTube channel, and click on the blue “Do Nothing Project with Jeff Warren” livestream link with that day’s date. At 8pm sharp, the screen will animate with an actual human, badly lit and occasionally dishevelled. That human will usually be me, your host. Sometimes, the host will be a guest guide, part of the DNP’s mission to democratize mental health by empowering other voices.

The most recent broadcast of the Do Nothing Project, from September 20, 2020

At this point, your host will say some words of greeting, and then they will guide a minimalist 25-minute  meditation that you can feel free to totally ignore. The time can be used to meditate, or doodle, or to stare vacantly into space while repeating ‘the humanity, the humanity.’

The whole thing has a nice community feel, with people from around the world accomplishing nothing together. If you miss a broadcast (like maybe you have a “job”), it will be archived on my YouTube channel, so you can watch it later, on your own timeline.

Of course, one could argue the moment we implement a meditation technique we are in fact doing something, but let’s not quibble. We are after directionally more of nothing than our previous moments of something. 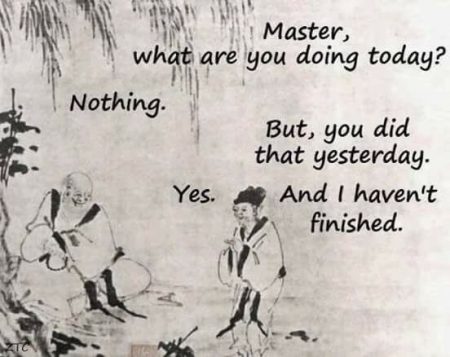 Good question. Of course I have no idea. I could go into a pretentious rant about the unconscious violence of our over-caffeinated workaholic culture (for which I am Exhibit A), but really, who has time for it?

Let’s just say this: because it will be a training in equanimity. Because every episode will be a surprise. Because it’s good to sit in community – near and far – and do mostly nothing. Together.

Much affection to all my friends. Hope to see you soon.

PS – If you want to receive email reminders every week about the next Do Nothing broadcast, you can subscribe to this list.

Also, here’s a fine NY Times article on the importance of doing nothing, as well as an interview I did on CBC Radio’s Now or Never about our project.

“A certain amount of ordinary laziness would lend our culture the pleasant mellowness which it singularly lacks.” – Alan Watts

“Zazen [meditation] is good for nothing” –  Kodo Sawaki Roshi