My first book. Took me two months to write and Frommer’s paid me six grand. Best part of the book to write was the 30-page ecology guide, where I got to wax on about the mighty moose (“the wild-eyed bell-tower hunchback of the animal kingdom”) and other critters.

Here is an excerpt: 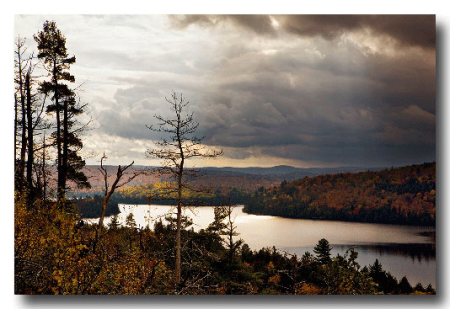 My brother or I would remark on it first: the eerie calm, the still leaves, the whole forest tense as if holding its breath. We’d stand on the dock and watch the dark clouds mount across the lake. The hairs on the backs of our neck would stir before any ripples were visible on the water. And then the winds would start, racing ahead of the storm like the barking scouts of war.

This is when you had to dig in. The cedars would bend back and the padded foam on the deck seats would be ripped into the air and flung across the bay. The distant snarl of thunder would get louder and fork lightning would suddenly leap up all around us, great corrosive bolts sometimes twisting into pinwheels. Soon the forest would be roaring with wind and electricity. And still we’d sit, terrified, waiting for the payoff: the Wall of Water. It would sweep across the lake like a dense grey curtain, frothing over obstacles and blocking out the light. We’d wait until the last possible moment before turning and running for the cottage, our heels wet with the licks of rain but our faces dry in the receding cell of empty air. And I have done this too in Algonquin, and my tent has seemed very fragile indeed. But the wind dies and the heavy rain passes and half an hour later the sun comes out. With a spectacle so short, it’s worth paying attention to the details.

Environment Canada calls late-April to mid-October “summer severe weather season” in Ontario. Fierce thunderstorms blow in off the Great Lakes, on average 150 a year. Of these 15 or so produce the necessary wind rotations for tornadoes, huge pipes of striated air whose winds whip across the land at 200+ kilometres an hour. Algonquin bears the scars of these tornadoes in the form of felled trees – wide swaths of raised wilderness. But no need to get paranoid. The park only gets half a dozen or of these thunderstorms per summer, and tornados touch down only once every few years.

For the most part these storms are an observer’s sport, loud but distant. The scale of the landscape is so huge in Algonquin that it’s possible to watch multiple storm systems move slowly across opposite ends of the horizon like buffalo on a prairie. They rumble ominously as they graze, and their dark bellies are filled with lightning.