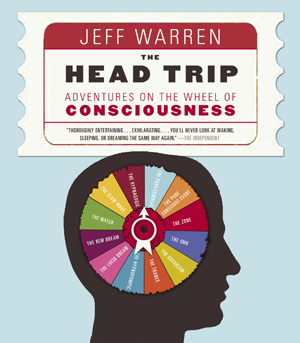 The UK’s Independent called it “exhilarating,” The New York Times’s Sandra Blakeslee called it “audacious, enchanting, often hilarious” and neuroscientist Adrian Owen in The Guardian called it one of the “Top Ten Books about Consciousness“. My Mom called it “long.” More reviews below.

Click here for a short summary in The New Scientist.

The Head Trip is a guide to the neuroscience and inner experience of waking, sleeping and dreaming. It is also a ridiculous attempt on my part to classify all the most elemental ways we are aware, which, as my friend Matt says, is like trying to stick Post-It notes on the ocean.

The narrative is me being a guinea pig for various scientific and quasi-scientific experimentation, from sleep lab analysis, to lucid-dream workshops, hypnotic inductions, neurofeedback trials, meditation retreats and more. Lots on the reality-bending nature of dreaming, one of the first popular accounts of neuroplasticity, and a chapter on ancestral sleep patterns, among others. The book will introduce you to you own mind, which may cause you to recoil, for it’s not everyday that you meet such a freak.

“Thanks for The Head Trip! You’ve invented and simultaneously mastered a wonderful new kind of hugely informative and meticulously rollicking science writing, and I can’t wait for your next book.”
-Tony Hiss, author of The Experience of Place

“I love your book!” -Oliver Sacks, author of Anthropologist on Mars

“In The Head Trip, Jeff Warren takes readers on an audacious, enchanting, and often hilarious journey into the slippery nature of human consciousness, from deep slumber to lofty states of enlightenment. This book will blow your mind.” -Sandra Blakeslee, co-author of On Intelligence

“The best contemporary book on the psychology of consciousness.” – Andre Kukla, University of Toronto prof, author of Mental Traps.

“In The Head Trip, Warren plunges into mundane and exotic states of mind with the verve of an intrepid travel writer…Warren’s initial motivation, he confides, was that of an experience junkie. By availing his body and brain to sleep scientists, hypnotists, neurofeedback researchers and the like, he hoped to savor all the “special effects” the mind is capable of orchestrating. With prose full of humor and nuance – no small feat for a topic as vague and subjective as consciousness – he makes that enthusiasm absolutely infectious. Especially since these states of mind are available to anyone. In that sense, Head Trip almost reads like an Oliver Sacks essay turned inside out; instead of rare neurological cases, we get the standard-issue noggin, which turns out to be every bit as exotic.” –Trey Popp, front page of San Francisco Chronicle Book Review [LINK]

“Jeff Warren … is my kinda guy: an experiential pragmatist in the William Jamesian mode, he is restlessly eclectic, deeply informed but pop, aggressively open to (and dissatisfied with) both neuro-reductionist and mystical accounts of consciousness, and keenly aware of the anthropological soup all this stuff is floating in … There are tons of books about consciousness, but … The Head Trip is an entertaining, substantive, and deeply stimulating book that, by staying focused on the concrete, actually contributes something to the field … a much more interactive picture of consciousness than the wiring diagrams and evolutionary-psych workouts we have come to expect from pop science accounts of the mind.” -Erik Davis, author of Techgnosis [LINK]

“The Head Trip is an amazing book. Jeff Warren manages to be funny while packing in tons of fascinating science. Rather than sticking to conventional boundaries, Warren follows his own formidable curiosity, producing a book that is quirky, refreshing and nothing short of groundbreaking.” -Tom Stafford, co-author of Mind Hacks

“Call it a travel guide to consciousness. From familiar landmarks like REM sleep and daydreaming to more exotic way stations like the “pure conscious event,” Warren’s exhilarating tour probes 12 varieties of conscious experience. Between lucid outlines of the latest research, Warren recounts his own adventures: training his attention with neurofeedback, trying his hand at Buddhist meditation, and banishing artificial light in search of a tranquil nocturnal wakefulness known as “the watch.” Culling the insights of anthropologists, neuroscientists, and monks, Warren offers a heady trip indeed.” –Psychology Today

“Warren’s hilarious writing makes the nearly 400 jam-packed pages a fun and entertaining read. Using dozens of interviews wide a wide range of scientists, Warren paints a picture of the current scientific understanding that underlies each state. But the real strength of The Head Trip is that Warren gives first-hand accounts of what it means to experience each variant of consciousness ”¦ The Head Trip opens the reader’s eyes to what it really means to wake, sleep and dream; it is “a trip into our own wheeling heads.” -Nicole Branan, Scientific American Mind

“It never occurred to me that you could write a travelogue about your own mind, but that is more or less what journalist Jeff Warren has done with The Head Trip, an entirely original and completely fascinating tour through the myriad states of human consciousness. For a lay person who loves books by Oliver Sacks, or other such dispatches from the realms of neuropsychology, this field guide to the latest mind/brain research is a must-read…There are no drugs involved. It is not altered consciousness that interests Warren, but the transmutable guises of everyday perception. He takes us around the clock, beginning at midnight, to explore 12 distinct states of being that raise some incredibly interesting questions about what it means to be conscious…a rich blend of research, theory and personal encounter.” –Patricia Pearson, The Toronto Star [LINK]

“[The Head Trip] is staggeringly ambitious in scope”¦and yet it’s also friendly and direct. The scientific research is solid and sometimes daunting to readers who haven’t retained much from past biology and chemistry classes, but the tone is conversational, smart and often wickedly funny”¦. one gets the sense of a fully engaged mind weaving an overwhelming glut of fascinating material into a synthesized, though multilayered, whole. And just as we must use the mind to examine the mind, Warren is fully present at all times in the narrative, with all his doubts, vulnerabilities and anxieties along with his infectious enthusiasm for learning about what makes us tick. It’s a highly readable, innovative work – while there have been many pop-science books on consciousness written for a general audience, this is the first to approach the topic from a personal perspective.”
–Damian Rogers, Eye Weekly

“Best book of the year. Using an original approach, Jeff Warren distinguishes twelve different states of consciousness, from lucid dreaming to the transcendental. It stands out because the author bases his ideas not only on the views of neuroscientists, anthropologists and meditation practitioners but also on his own personal explorations. Particularly fascinating are his discoveries about the murky realm of sleep. Sprinkled with comic panels, this book is as entertaining as it is insightful.” – Peter Russell, author of The Global Brain

“Jeff Warren has done a great job with The Head Trip. Writing about any aspect of consciousness is treacherously difficult, but his take on the subject is clear, original and ” amazingly ” funny!” -Rita Carter, author of Mapping the Mind and Exploring Consciousness

“As readable and fun as a novel, yet accurate and up-to-date, The Head Trip is about your most precious possession – your consciousness – and the fascinating states it goes through.” -Charles T. Tart, author of Altered States of Consciousness

“The Head Trip is notably distinct from most books on the subject of consciousness. Rather than issue recondite field reports on contending theories, such as the debate between those who believe that what we call “the mind” can be located in the neurons and other physical properties of the brain, and those who contend that it is an irreducible process, Warren instead sets out to actually experience what it feels like to measure, and inhabit, altered states of consciousness …He treks in winter to an isolated cabin without electricity, heat or water to experience sleep the way our ancestors did…In another exploration, Warren uses a delightfully odd device called a NovaDreamer to induce “lucid dreaming” … He also endeavors mightily to become hypnotized, experiments with biofeedback and spends seven days at a meditation retreat. Through all these inner adventures, he gracefully interweaves descriptions of new empirical methods to detect and describe conscious states … in The Head Trip, [Warren] manages to plumb inner depths that few other writers have attempted to explore.” -Michael Antman, Chicago Sun-Times

“In this likeably evocative book, Jeff Warren goes on a safari of his own mind … The author illustrates his ideas with cartoon strips and amusingly rambling footnotes, and the book is full of sentences that make you stop and consider daily experience from a different angle. For example: “All wakefulness is in theory sleep deprivation.” It struck a powerful chord with me.” -Steven Poole, The Guardian