Excerpt from The Head Trip, this bit below comes after a long riff about how different artists and scientists and thinkers have used the hypnagogic state at sleep onset for creative problem solving. 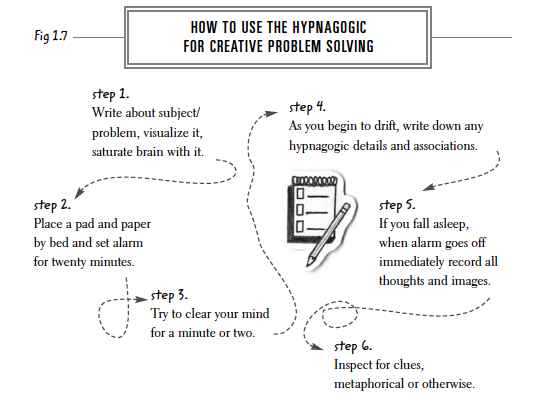 The hypnagogic is the ultimate paradigm-busting tool. As your brain slips into an associative, impressionistic state, it is no longer bound by conventional wisdom. Saucy ideas – impossible within a certain rational framework – clamour for attention. Images become metaphors for concepts, and suddenly everyone is a poet. The thing to realize here is it’s not just associations of degree, but associations of kind. So in addition to making new factual and ideational links on the “rational” plane, you also get visual images linked to concepts, or mathematical formulas linked to sounds, or physical experiences linked to emotions. This cross-platform synaesthetic mixing is the primeval soup of creative thought, and while something similar may also be happening in regular dreaming, in this case there is a crucial difference: the waking state continues to wield influence in the hypnagogic; thought structures – although loose – maintain a bit of that cause-and-effect robustness. Thus dreamers are able, as another commentator has put it, “to critically evaluate images while they’re still before the eyes.”

I’ve experienced a bizarre phenomenon that seems emblematic of this state. Occasionally as I drift off to sleep I’ll find myself obsessively reviewing some mental image. It is almost always absurd”the cross section of a tennis shoe, for example”but it seems charged with significance. I’ll spend long minutes trying to qualify the shoe according to various bizarre criteria: the number of right angles, possible scientific names, political affiliations, cool handshakes. Then I’ll pass out in defeat. It’s as if as soon as I hit the tunnel of sleep, select mental arrays or structures from waking”like sturdy cargo trains”stay activated, but the freight itself is swapped for some absurd new cargo.

The cargo train metaphor is a useful way to think about associative thinking. Cargo trains can be any kind of mental array or set of relationships: a social hierarchy, some political situation at work, or”as often happens in my case”some type of conceptual taxonomy. So to give a more elaborate example of the latter, let’s say my cargo train is a taxonomy of stone arches. There I am, awake, thinking about my system of stone arch classification”triangular arch, elliptical arch, lancet arch, and so on”all of them lined up in their proper order according to class and architectural style and whatever other technical aspects I have in my head, the whole exercise an almost automatic procedure on the part of the ever-classifying rational mind. Now as soon as that cargo train hits the tunnel of sleep onset, something peculiar happens. The orderly stone arch taxonomy remains, but suddenly the freight”the individual stone arches themselves”gets swapped for something new. So now it’s combinations of wallpaper patterns, or the faces of people I saw on the bus that day, all now arranged in a taxonomy built initially for stone arches. Which leads to absurd thoughts like trying to calculate the weight load of a particular swirl on the wallpaper next to my bed. This is a very literal example; the associative mind seems to substitute whole other classes of elements into these mental arrays. They may be emotions”feelings you have for some person, for example, now structured by stone arch style”or they may be random bits of sensory input”the smell of citrus, say, or the balled-up texture of sweater lint. Something to keep in mind the next time you find yourself obsessively classifying sweater lint as you drift off to sleep. You are not alone!

Providing you can find a worthier subject than the tennis shoe, all of this suggests that the hypnagogic is perfect for problem solving. The question is: how do you retrieve solutions when you are charging into sleep, the notorious memory-obliterator?

One answer can be found with the kingpin of problem-solvers, Thomas Edison. Edison’s mechanical mastery appeared to extend to his own body. He claimed to need very little in the way of sleep, but he was a champion napper, a state that in its first 20 minutes is almost pure hypnagogia. When Edison was stumped on a problem he would find a comfortable chair and settle into one of his naps. On the table in front of him he would place a pad of paper. In each hand he would grip a steel bearing, and on both sides of the chair he would deposit a tin plate. He would then sit back in his chair, dangle each hand over its respective plate, and doze off to sleep. As he began to drowse, one or both of the bearings would fall out of his hands and hit the tin plates, waking Edison with a start. And it was in that period of half-wake, half-sleep that many new ideas came to him. The falling bearing was the associative mind, racing away with the insoluble problem. The tin plate was the leash of waking consciousness. With a clank it would yank back unexpected connections for Edison to inspect and duly document in his notepad.

Salvador Dali apparently used a version of the same technique to prepare for his own creative exertions. He called it “slumber with a key”:

In order to make use of the slumber with a key you must seat yourself in a bony armchair, preferably of Spanish style, with your head tilted back and resting on the stretched leather back. Your two hands must hang beyond the arms of the chair”¦Your wrists must be held out in space and must have been previously lubricated with oil of aspic”¦In this posture, you must hold a heavy key which you will keep suspended, delicately pressed between the extremities of thumb and forefinger of your left hand. Under the key you will previously have placed a plate upside down on the floor. Having made these preparations, you will have merely to let yourself be progressively invaded by a serene afternoon sleep, like the spiritual drop of anisette of your soul rising in the cube of sugar of your body. The moment the key drops from your fingers, you may be sure that the noise of its fall on the upside-down plate will awaken you”¦

Finally, after some practice, I have developed my own personal technique. Although it has yet to revolutionize organic chemistry, or send Parisian art critics shrieking from the gallery, it is nevertheless a reliable way to come up with unexpected insights and associations. It can be used for naps or at night before going to bed. I begin by writing about my target subject, obsessively mulling over connections and meanings. You need to really prime those neural networks, get them (and you) all fired up. After half an hour or so of this I’ll lie down, try to empty my mind, and set the alarm for 20 minutes. Inevitably, as I start to drift away ideas begin to pop around me like soap bubbles. They’re always one track removed from my main preoccupation, like mental echoes from an adjoining dimension. I scribble the most interesting ones in a notebook, though there is always the danger that I will fall asleep first, and like a drowning swimmer drag the new ideas down with me to hopeless irretrievable depths. This is where the alarm comes in; it helps bring ideas back, though you have to document them quickly before they float off. The whole technique seems to work better if I’m in a good mood or am excited about the subject. If I’m bored or feeling indifferent, then the bubbles do not pop. They sputter and fizz and then they beep because that’s the alarm and the nap is over.

Of course, for every real insight there are dozens of lemons”this isn’t magic, it’s still your fallible human brain operating. I also had the idea of serializing The Head Trip as a comic, and for a tantalizing few minutes was absolutely convinced that the She-Hulk would make a great allegorical protagonist. My favourite story of bad dream ideas is an unnamed poet who wakes with what he imagines is a sublime verse. He scribbles it down and returns to sleep. When he wakes the next morning, he turns to look at the words, “which he doubted not would make his name immortal:”

Walker with one eye,
Walker with two,
Something to live for,
And nothing to do.