“Cities are plastic by nature. We mold them in our own images: they, in their turn, shape us by the resistance they offer when we try to impose our own personal form on them.”
–Jonathan Raban, Soft City

From 1999 to 2002 I lived in London, worked at Dorling Kindersley, and shared an office with a talented designer named Nigel Hayler. Both of us were obsessed with London – its history, art, architecture, but also where to loiter when you’re skint, where to find the most interesting textures, and how to position yourself at dusk so that the city’s most interesting interiors illuminated in front of you like stage sets. We eventually built what we called an “impressionist encyclopaedia” of London. The idea was to create an online forum for everyone’s subjective take on the city – artist, banker, hedonist, anarchist, curator, whatever.

Unfortunately, after 2 years of hard work – I wrote hundreds of pages on London and spent endless hours working out the site’s complex functionality with Nigel – just as we prepared to launch urbantherapy the dot com crash happened. We couldn’t find anyone to fund the thing, and we were too broke to continue. So it goes, as Kurt Vonnegut would say.

Walking around the city for months on end, peeling back its many onion skins, struggling to capture the shifting phenomenology of urban experience – it was the most fun I ever had and mentally primed me for Head Trip. I still love cities and plan to write a book one day about how cities affect the mind. I’ve posted a few screenshots from an old version of the site below. 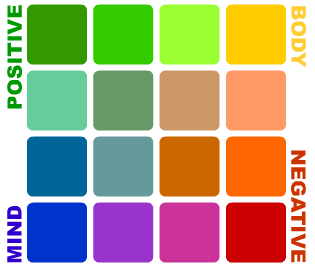 The core feature of my and Nigel Hayler’s urbantherapy website was the “Mood Palette:” 120 different moods arranged along a mind-body and a positive – negative axis. Each mood – “awestruck,” “surreal,” “sexy” and on – captured some flavor of urban experience. Nigel build the Mood Palette in Flash – it looked terrific, wish it were still operational.

“I have often amused myself with thinking how different a place London is to different people. They, whose narrow minds are contracted to the consideration of some one particular pursuit, view it only through that medium. A politician thinks of it merely as a seat of government in its different departments; a grazier, as a vast market for cattle; a mercantile man, as a place where a prodigious deal of business is done upon ‘Change; a dramatick enthusiast, as the grand scene of theatrical entertainments; a man of pleasure, as an assemblage of taverns, and the great emporium for ladies of easy virtue. But the intellectual man is struck with it, as comprehending the whole of human life in all its variety, the contemplation of which is inexhaustible.”
–James Boswell, Journal 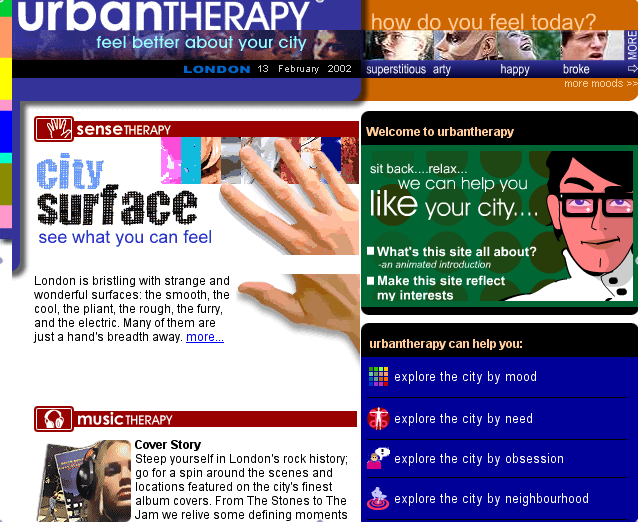 Every listing had an image, location details, general reusable place text (black), and then special mood or obsession-specific text (blue) that could be constantly refreshed. Here is the first listing I wrote – part of a feature on tactile London. 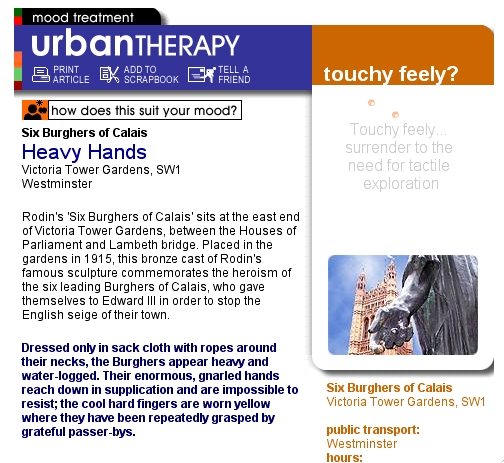 Another listing, for those feeling reflective: 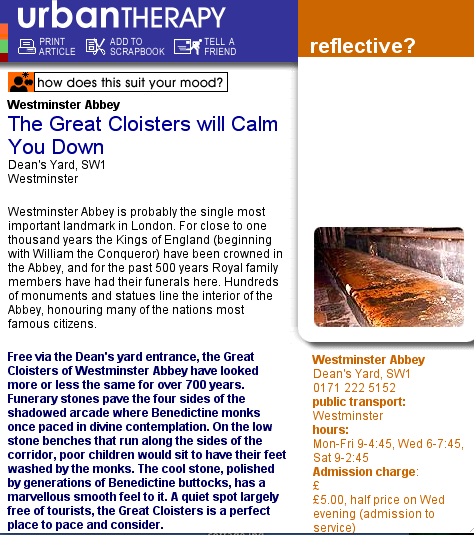