The Harvard psychotherapist and early science-of-meditation pioneer Jack Engler wrote those words over 25 years ago now, as an attempt to reconcile two seemingly irreconcilable perspectives: Buddhism’s recognition that higher stages of mental and emotional health depend on seeing through and beyond the self, and psychology’s recognition that, actually, establishing a healthy self is an integral part of growth and development. To do the former successfully – to become a healthy nobody – you first have to become a healthy somebody. The meditation scene is littered with “spiritual bypassers” who shoot for transcendence because they can’t handle the world – and the self – they’ve inherited. This isn’t a judgement; people are in pain, and meditation can help with that pain. But it’s important to remember that some of the issues we uncover in practice can’t be healed by meditation only. We need to actively engage with them – to “gouge them out from the multifolded brain like wood lice from under the woodpile” to quote my dead man John Updike. We must do this with bravery and – since you are so freakin’ weird – unbridled hilarity. 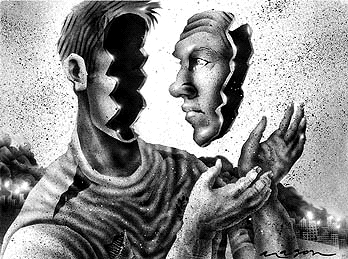 And please don’t get all Protestant with your judgements around therapy as self-indulgence. The world is filled with dis-regulated neurotic assholes spreading their reactivity and their unconscious idiocy over everything. You work on yourself – meditatively, sometimes therapeutically – so you can be more effective at being with others, at helping others. It’s that simple. Making these kinds of connections is one of the benefits of having a functioning frontal lobe. Wow, that was reactive. So what? I’m the President of neurotic reactivity – I know what I’m talking about. Maybe I need more therapy!