From The Globe and Mail Books section, Saturday October 3rd, 2009. 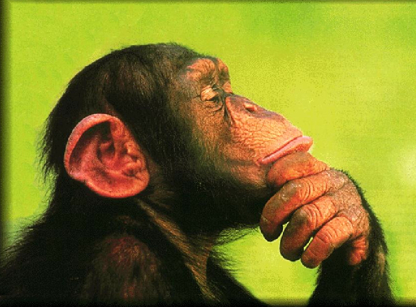 Reviewed here: The Age of Empathy: Nature’s Lessons for a Kinder Society, by Frans de Waal; The Wauchula Woods Accord: Toward a New Understanding of Animals, by Charles Siebert

“The book of nature is like the Bible: Everyone reads into it what they want.” So writes eminent primatologist Frans de Waal about a third of the way into his latest, The Age of Empathy: Nature’s Lessons for a Kinder Society. As nature readers go, de Waal is among the most accomplished. He has spent the better part of 30 years studying chimpanzees and bonobos, sometimes in the wild, but mostly in his capacity as director of the Living Links Center at Yerkes National Primate Research Center in Atlanta, Ga.

And what a sobering education the apes have given him. For six books, de Waal has chronicled their scheming and their turf battles, their amazing problem-solving abilities and sexual politics. From the start, it has been clear to de Waal that the apes represent a kind of proto-human society, with many of our same patterns and preoccupations. These days, there is nothing controversial about this view; it’s trotted out by pundits and newspaper columnists at every opportunity, all of them enthralled by evolutionary psychology – the idea that all of human nature can be explained by adaptive responses formed on the prehistoric savannah – as a kind of arch-explanatory paradigm. If we want to understand ourselves, the thinking goes, then look to our ape ancestors, who exhibit many of the same traits in more elemental form.

De Waal is very much with this program, and he is an astute enough cultural commentator to recognize how the specific details of this narrative influence politics and society. If you believe that humans are fundamentally competitive and selfish – “nature red in tooth and claw,” the body a teaming aggregate of “selfish genes” scrambling over each other to maximize individual profit – then perhaps you let the free markets rule the day. “Can’t fight nature,” shrugs the conservative.

But if you believe humans are by nature altruistic and conciliatory, then perhaps you organize society in a more socially responsible mode, with an emphasis on collective interests.

This, finally, is the news – the very good news – from de Waal’s book: Yes, like our ape ancestors, humans are “incentive-driven animals, focused on status, territory and food security.” But we are also group animals, sensitive to injustice, highly co-operative and sympathetic. We are, in short, both Canadian and American. And so are the apes. And off we go, into the new age of empathy, in what is for the most part an enjoyable tour through a kinder and gentler animal kingdom.

De Waal is an excellent tour guide, refreshingly literate outside his field, deft at stitching bits of philosophy and anthropology into the narrative. He is also pleasingly opinionated; he seems to have columnist aspirations of his own, and his frequent – usually thoughtful and balanced, occasionally facile – digressions on morality and U.S. politics read like boilerplate New York Times editorials.

Empathy, de Waal says, is one of our most innate capacities, one that likely evolved from mammalian parental care. It begins in the body, a deep unconscious synchrony between mother and child that sets the tone for so many mammalian interactions. When someone smiles, we smile; when they yawn, we yawn; emotion is contagious.

The effects of this can be profound; at one point, de Waal describes some research on long-term married couples, who, studies have apparently shown, do come to resemble each other over time. It is as if they “internalize” one another, de Waal writes, the constant synchronization of facial expression and mood slowly morphing two into one.

And chimps, too, feel this contagion – apes ape. They mirror and they console, they grieve and they co-operate, they hold to principles of fairness beyond personal gain. And more besides. De Waal is thorough in his documentation, sometimes too thorough: The second half of the book reads at times like a social scientist’s checklist of category-fulfilling anecdotes.

He makes up for it in his final chapter, which presents a rich and multilayered model of empathy. Like a Russian doll, simple body-to-body “state matching” is contained within a larger concern for others, and this in turn is contained within the imaginative ability to take on another’s perspective. As humans, this may be our greatest gift, though, as de Waal demonstrates, perhaps not ours alone.

If de Waal only points us toward this intriguing and still mysterious perspective-taking capacity, journalist Charles Siebert – also a poet, and thus perhaps more willing to take literary risks – takes us further. In his Wauchula Woods Accord: Toward a New Understanding of Animals, Siebert tries to go in – through the eye, directly into the “deep-brown, druggy swirl” of a chimp’s steady gaze.

The chimp in question is Roger, former circus performer and now resident of the Center for Great Apes in Wauchula, Fla. Siebert meets Roger one afternoon while touring the rehabilitation facilities. The author, we learn, is “uncommonly attuned” to chimp vibrations; several encounters with chimps in the past have left deep impressions on him, and Roger himself seems to recognize in Siebert something familiar. They become acquainted, as it were, and Siebert decides one night to hold a vigil in front of Roger’s cage, for eight hours sitting face to face with his “primatological doppelganger,” wondering at Roger’s almost-humanness and his own forsaken animality, locked together into a strange communion, “like two primates,” Siebert writes, “passing in the night.”

This single encounter is the primary narrative thread of the book, and if at first the device feels a bit contrived, it eventually pays off – indeed, after returning again and again to Roger looking out from his enclosure, his long fluttering hands, the tight whorls in his facial hair, something unexpected beings to happen.

Not unlike de Waal’s “internalization,” these moment-by-moment descriptions create a present-ness with Roger that is rare in the literature. It goes, finally, beyond anecdote, because Roger isn’t actually doing anything clever, or primal, or even interesting. He’s just being. How weird, we come to realize – how completely astonishing, in fact, his being actually is. And so we are taken out of ourselves, into a gently expanded community of nature.

If Roger is an avatar of suffering at human hands, he also represents something new: a “humanzee,” in Siebert’s language, one of several thousand exiles from the wild, domesticated (in Hollywood studios and traveling circuses and roadside zoos) just enough to be estranged from their heritage and then abandoned in an inhospitable limbo state somewhere between animal and man. Siebert tells the stories of other humanzees, sometimes pulpish and bizarre, as in Stalin’s dreams of a Red Army of human-ape hybrids, sometimes heartbreaking, as in the story of a young female chimp raised as human and then returned to the forest.

The writing is terrific, breezy and good-natured, with just the right amount of controlled outrage. The book’s emotional centre is about elephants, not chimps, an almost biblical parable of “wholesale psychological and cultural collapse” that Seibert first told in the pages of The New York Times Magazine. Their parents slaughtered before their eyes, and bereft of parental guidance, a generation of young African and Indian elephants are wreaking havoc on the countryside, trampling huts, goring villagers, even – in an act of human-like perversity that’s as revealing as anything else – raping and killing rhinos.

The wild isn’t just in revolt; it’s suffering full-blown PTSD. This is the judgment of Uganda-born animal ethologist Eve Abe, who noticed the similarities between the rogue elephant teenagers and the hollow-eyed child soldiers of her village, who often witnessed their own parents slaughtered and grew up in horrific conditions.

Like humans, sensitive elephants depend on a web of familial and social relations for orientation and guidance. Without it, they unhinge. They are animals, in Siebert’s memorable phrase, with “minds enough to lose.”

The Wauchula Woods Accord is an animal manifesto, a plea to see our wild cousins as integral parts of ourselves. With the world’s remaining wilderness frontiers collapsing, this recognition can’t come soon enough. “They have no future without us, the chimps, the elephant, the whales and the rest. None. The question that we, the keepers, are facing is whether we’d mind a future without them … whether we’d be bothered by an Earth with no living vestiges of our own differently shaped selves.”