The Elder said to Breath one day: “Why should I follow you?”
Breath responded: “Because my pathways will lead you to the one who loves you”
— Lakota Teaching

Therese showed up one day last year at a meditation class I was guiding in Costa Rica. A willowy American in her late 50s, she had long gray-brown hair and elegant blue stones in her ears. I liked her right away. She was unassuming, yet her meditation reports were interesting and deep.

I found out she taught Qi Gong, and in the mornings we began practicing simple flowing postures together on the beach. She would laugh as I plowed through the sequence.

“Qi Gong moves at the speed of awareness,” she said. “If you go too fast, you’ll run right past it.”

I started to slow down. Sometimes a softness would come up through the central column of my body. After our sessions I felt calm and refreshed. It reminded me of when I first began meditating. I hadn’t felt that way in a while.

Last year, at a mood disorders clinic in Toronto, I was diagnosed as bipolar. Whether or not I accepted the label, it was an accurate description of my symptoms. It had taken me so long to notice because mostly my moods were up – like, WAAAAY up. How could that be a problem? Being high is awesome! Even though you’re not really making contact with anyone because you’re running right past them!

But now the lows had come – more, it seemed, each month – and they were brutal. Plans canceled, creative work dropped, everyone let down. Or at least I imagined them let down. Mostly I let myself down (for not being high enough). So I’d twist the knife, and my doom would deepen. It felt like there was no way out.

A dislike of cycles had even entered my teaching. When I spoke about healing, I used the metaphor of a curvy sine wave slowly getting flatter and flatter. I imagined meditation would level us out.

Therese and I both laughed when I told her that.

Hanging out with Therese, it was clear to me that I no longer really knew what I knew, and the things I thought I knew were changing. 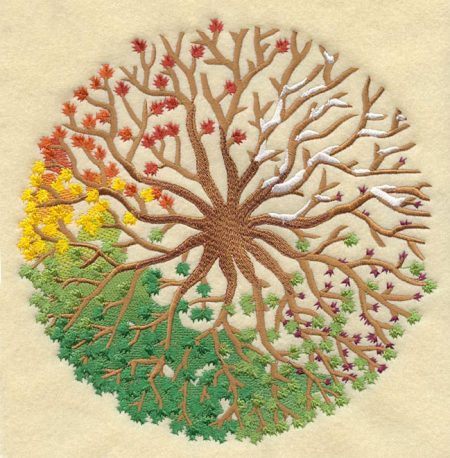 Therese practiced “cycle wisdom.” She taught it in Qi Gong and in the breath. She taught it as a life reorientation, as she helped people notice and accept the changing rhythms of their moods and capacities, inside the larger rhythms of nature itself.

How do we begin again?

According to Therese, we have no choice. We just do, because that’s where the cycle takes us, again and again. It’s part of nature.

Take the breath, she said. Every inhale a creation, an entire life. And every exhale a destruction, a little death. And between … something unknowable.

Could I welcome my lows the way I welcomed the out-breath? Could I experience my exhaustion and confusion as nourishment for the next upward movement? Could I get better at dying?

My whole life I’ve gone to my head for answers. I’ve read and I’ve pondered and I’ve strategized. It used to drive me crazy when “spiritual” people disparaged the mind. The mind is the great creator. It’s holy. But of course, the mind doesn’t operate in a vacuum. It lives in the body, and thus is handmaiden to the body’s larger knowing, which unfolds from moment to moment in the most natural and common-sense way.

It was the body that told me to slow down. That told me where I was at, and what practice I needed, and what it felt like to be present.

Was I ready to listen?

“This is the end of something,” I told Therese. “Or maybe a new beginning.”