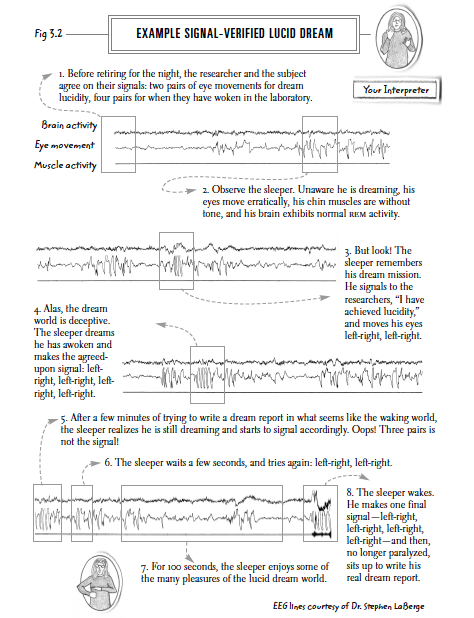 Courtesy of the pioneering psychologist Stephen LaBerge, this is arguably one of the greatest scientific figs ever assembled by Man. It may not make much sense unless you know the full story, detailed in chapter 3 of my book, The Head Trip. But basically the fig describes one actual lucid dream and the subsequent eye-signaling that took place between the dreaming subject and his peers in the sleep lab, who watched the whole drama on the EEG and EOG computer screens. It is one of the first examples of real-time communication between two domains of consciousness. I think in a century from now the scientific “discovery” and subsequent validation of lucid dreaming will be considered one of the great unheralded discoveries of our age. Seriously. Part of a new era of investigation into the mind. “Isn’t lucid dreaming some kind of New Age thing?” Don’t be ridiculous. Let me spiel about why this matters to everyone.

We can start with the doubling of existence. We live in two realities. Two. Waking and dreaming. And yet we’re only capable of noticing one. This is because most of the time in dreams we’re on automatic, plus various memory processes are muted. This combination makes dreams powerfully forgettable. But it turns out you can learn to wake up in a dream with all your waking faculties intact: reason, memory, intentionality. They’re all there, booted up and ready to serve you, Dream Warrior, dream hairdo blowing in the dream wind like you’re in a Vidal Sassoon shampoo commercial. Look how magnificent you are! But I have become distracted. When you wake up in a dream with all these rational waking faculties – well, what happens is your understanding of reality immediately, and forever, explodes. That’s because you find you’re not in some washed out memory of a dream – you are moving in real time through a completely real-seeming virtual universe, paralyzed with shock, heart pounding in your chest, repeating to yourself

Yes – it’s that mind-blowing so wake up and look for yourself. People ask me what lucid dreaming is like. Stop reading and look up from your computer – look around the room, at the walls, through the window. Touch the seat of your chair, feel the texture of the rug on the floor. That’s what lucid dreaming is like. It’s like waking reality. Period. At least it seems that way at first. But soon you begin to notice differences. As you begin to explore – again, this real place, with people and cars and shit – you begin to realize there are a set of universal experiential laws in this domain that are akin to the laws of physics in waking. And yet no one even knows they exist, including 99% of sleep scientists. This is the second time your mind-gasket gets blown. Because I’m not talking about some wimpy post-wakeup dream interpretation – the so-called “rules” of dreaming you get from reading dream symbol books or even from talking to a smart dream therapist. Most of these aren’t universal – they’re personal. But universal laws do exists. These have to do with the dream’s operating system, the structural rules that govern the movement of your dream body and why things get unstable and how expectations shape the scenes you find yourself in and on and on – real laws amenable to empirical investigation and peer-to-peer validation that anyone can take part in – that is, if they take the time to learn how to become lucid. Because you have to be lucid to really participate. Otherwise you’re only looking at dreams after the fact – which is a little like trying to learn about India by watching a TV program about it. Go to India! Smell the incense, buy a local dinner, get diarrhea. Everything else is hearsay.

Why do I think this is so important? Because it’s the other part of reality. Why did the explorers leave Europe? Because they had shit to learn, adventures to undertake, diseases to spread. The opportunity to conduct rational experiments in lucid dreaming has only just arrived – only the mystics made any use of it in the past, and we’re scared of mystics on account of how they threaten our worldview. But now scientists can – and a few actually are – get in on the action. Using agreed-upon patterns of eye-signals, people like the psychologist Stephen LaBerge pass messages back and forth from dreaming to waking – again, in real time. Him and his fellow investigators make reports. Their dream hairdos look awesome. They conduct experiments and publish them in peer-reviewed journals. Where are all the other scientists? The place should be packed with nerds and their dream slide-rules. Instead the whole subject is written off as a flaky epiphenomenon.

Who knows what we’ll find down there if we take the time to look carefully, mindfully, without assumptions. The boring unimaginative view of dreaming considers dreams solely the domain of you – you may be able to learn things about your own psychology, but that’s it. WRONG. You can learn plenty about your psychology, but you can also learn about the physics of mind more generally – this is mind in a pure culture, without sensory input to dilute everything. And then – and here is a completely heretical idea but one I think may be the bestest ponderschniffle I ever had – there is also the possibility that you can learn something about the external world too, which is distorted and reflected back into the dream in ways we’ve hardly begun to appreciate. Who knows what we’ll uncover as we plumb the transition zone between the internal and the external.

This is a new story, the beginning, in fact, of a new category. Dispatch the galleons!

Click HERE for a comic I made about this new adventure in the making.